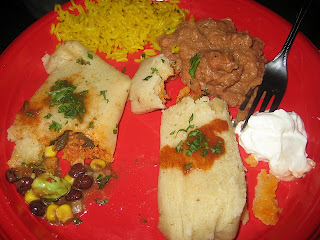 In my private moments, I like to fantasize about having a Mexican mother who insists on spending hours, days, maybe even weeks (it's only make-believe so it's okay to turn my imaginary mother into a slave) behind a stove, cooking me authentic Mexican dishes. While I love the annual dose of matzo ball soup my own (read: not Mexican) mother cooks up, a cold slab of gefilte fish ain't got nothin' on a pan of fragrant chicken enchiladas. Sorry real mom.

So last weekend I decided to take matters into my own hands, and become my own Mexican mother. I then waved my magic wand and turned my entire cooking club into a gang of Mexican mamas, and together we went to work on making a whole lotta homemade tamales.

Tamales require several hours to make, but the end result is so completely worth it. A tamale fresh from the steamer is the moistest, most tender you'll ever taste. We stuffed most of ours with fork-tender, red chile-tinged, pork but accommodated the lone vegetarian with a roasted poblano chile, jack cheese and black olive version.

Tamales are best tackled by a hungry group, so get your posse together and get cooking!

In a blender, puree the chiles, garlic, cumin, black pepper and 3 cups of cold water. You may have to do this in batches. Push the fiery-looking red puree through a sieve and into a big pot with the cubed pork. Add another three cups of water and a bunch of shakes of salt. Bring this to a boil then drop the heat to medium/medium-high and reduce until it becomes a nice, thick sauce. This could take about an hour and a half. Stir often. Taste and add salt if needed. It will be needed. When the pork has sucked up most of the liquid, shred with a fork and let it cool to room temperature.

I bought a bag of Instant Corn Masa Mix (also available at Safeway). Mix 2 cups masa mix with
1 1/2 cups warm water or broth, 1 teaspoon baking powder, ½ teaspoon salt and 2/3 cup lard or vegetable shortening. I went the shortening route, and you'll need to whip it with a hand mixer until fluffy before mixing it into the dough. It should be moist, but not too loose.

Get a bag of dried corn husks. Soak them in cold water for about 20 minutes. You'll need two or three husks per tamale, depending on their size. 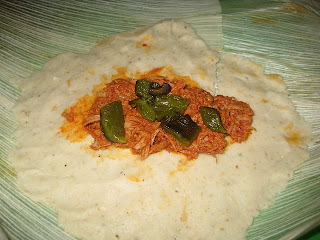 Take two corn husks (bigger are better) and lay them down so that the wide end of each overlaps by a couple inches. Spread masa dough over the husks, no more than 1/8 inch thick, leaving a wide border on all sides. Spoon a thin line of pork down the center of the masa. Fold her up like a burrito, smushing the masa together to hide the filling.

The tamales will need to steam in a big pot (a steam basket, flat metal veggie steamer, or bamboo steamer all work) for about an hour. You will probably have to add more water – so keep a close eye on the pot so it doesn't burn! 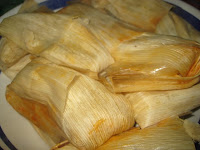 Leftover, refrigerated, tamales can be brought back to life with a revitalizing 15 minute steam. Don't you dare warm them in the microwave!

Top your little beauties with a scattering of cilantro, a dollop of sour cream and a splash or three of Tapatio or fresh salsa.

Oh man...you haven't lived til you've made your own tamales! Those look really good!