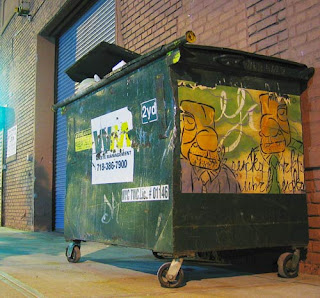 They say one man's trash is another man's treasure. But I'm pretty sure the bloke who wrote that line wasn't imagining me shoving dumpster dived baguettes into a garbage bag at 11pm on a Tuesday night.

That's right, dumpster diving! Something I've been dying to do for years!

I happen to think there are several appealing aspects to rummaging around a big metal dumpster looking for a bit to eat. First off, the adventure! It's like searching for buried treasure. Plus you have to go when its dark and you can wear all black and a ski mask if you really want to get all dramatical. Second, I despise waste. I reuse tin foil and scrape the mold off my cheese. I don't need to remind you how much perfectly edible food Americans absentmindedly fling into the bin each day. And third, this food is free! With our collapsing economy, dumpster diving is as sensible as dropping J Crew for JC Penney.

I know what some of you are doing right now. You are making a snooty little wrinkled up sourpuss face. You are throwing up juuuust a little bit in your mouth. You are about to call and tell me you “have come down with SARS and can't possible make it to my dinner party Saturday night.”

But you should stop your sneering! Diving for dinner doesn't have to be disgusting. I didn't go snorkeling through your grandma's trash can, looking for a half-eaten Entenmann's cake. No sir. Hours after America voted to elect its first black president, three garbage giddy gals and I pulled up to one of Seattle's best bakeries. A bakery that charges about $5 for a loaf of it's organic artisan bread. A bakery whose name I am hesitant to mention, because I don't want it to start locking it's dumpsters!

And what delightful dumpsters they are! Lift a heavy metal lid, hop in the bin, and you will be knee deep in delicious bread; still securely tucked into paper sheathes. We plucked up round, crusty loaves of rosemary bread sprinkled with sea salt and squishy-soft sweet potato bread laced with pecans. There were long swords of sourdough and bags of dainty dinner rolls. Three garbage-free dumpsters. Pi 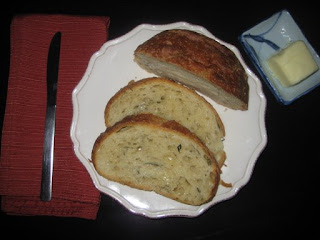 led with bread. We hardly made a dent.

I was scrounging for pleasure, but there was also some do-gooder diving on that historic night. Two of my freegan friends were gathering grub for Food Not Bombs, a grass roots organization that feeds the homeless with food that would otherwise go to waste.

The next morning at home, as I munched on slices of fragrant rosemary toast with butter, I decided this was only the beginning. Adventure! Less waste! Free food! I will scour every last dumpster in Seattle until I find the makings of a complete meal! And if I have to dramatically don an all-black outfit and a ski mask to do so. Well...so be it!
Posted by Eat. Eat. Eat. Enjoy! at 3:09 PM 1 comment: