It smells like pig in the Memphis airport. Big, fat, succulent, juicy pig. Ribs. Bacon. Pork chops. A virtual storm of swine smacked me in the nose the second I walked off the airplane. I pity the rabbis who travel to Memphis.

When I got in the rental car, and turned the key, the local public radio station pumped 1950's rockabilly into the mid sized sedan.

This is why I came to Memphis: music memorabilia and barbecue. And good old fashioned kitsch. Eleven years after my mom and I boarded a double decker bus in Liverpool for the Magical Mystery Tour, here we are touring Graceland, Sun Studio, and being Baptist-for-the-day at Reverend Al Green's Sunday morning service. Oh, and depleting the world of its WetNap resources at several hands-on barbecue joints. 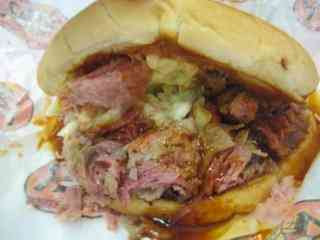 Pork is to Memphis as Barbra is to the gays, so it would be wrong to resist the fine swine available at BBQ joints like A&R Bar-B-Que on
El 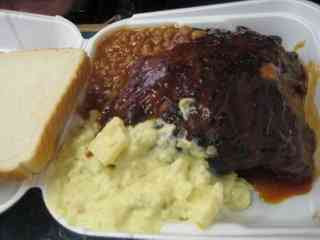 
The A&R magicians are behind this sensationally sloppy pulled pork and coleslaw sammich, and a slab of fall-off-the-bone sweet-sauced ribs. Use the two slices of soft, government issue white bread as edible napkins. Avoid the sickeningly sweet tea if you're not into getting cavities. Order more fried, beige food in the form of crunchy, breaded deep fried pickles.

I didn't go into this barbecue business blindly. With only two-a-half days to gnaw meat off bones, I sought the advice of down-home-Americana-food gurus Jane & Michael Stern then cross-referenced their picks on chowhound.com. I also wore horn rimmed glasses, made pie charts and briefly held a protractor. But not in vain. Without my sacred list of rundown barbecue restaurants, Mommy and I would have been driving aimlessly around the horribly depressed city, resorting to Church's Chicken drive-thrus. 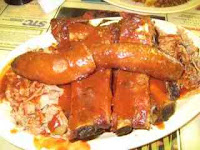 The List lead us to Interstate Bar-BQ, whose owners (The Neely's) are apparently the stars of a new Food Network show. When the folks at Interstate get bored, they stack meat. Here is a link-n-log cabin made out of pork ribs, beef ribs, pulled pork and links. After a few bites of the chewy beef, I decided I was wasting my time and precious stomach space. I needed to save room for a Memphis specialty, a side dish that has furrowed the brow of every non-Southerner I have described it to. Barbecued spaghetti. Spaghetti with barbecue sauce, and yes, more shredded pork. Meh. I vote for the plastic urine-sample cups of crispy slaw and smoky beans. Yeah, that's right, I aint afraid to ruin your appetite with my crude descriptions. 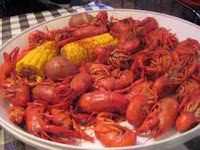 After an enthusiastic, fist pumping, two-day meatfest (I also ate ribs at the Blues City Cafe on Beale Street before my mom arrived), we decided to detox....with two pounds of crawdads (fondly nicknamed Mud Bugs) and a dozen Louisiana oysters on the half shell. Our lips and tongues zinged and burned, as we sucked the tail meat from the spicy, Old Bay dusted crustaceans. Unfortunately the oysters belonged on an episode of Bivalves Gone Bad. Freakishly large and absolutely flavorless, we had to console our taste buds with a tart, custardy-smooth slice of Key Lime pie. 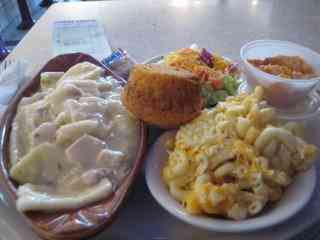 You know you are a food obsessed freak when you nearly miss your flight because you insist on eating at Memphis' very first cafe, even though you've spent your allocated lunch time getting obnoxiously lost searching for said historic cafe. With only fifteen minutes to order, eat and pay, I did something I never do: quickly ordered a meal. No hesitation. I only asked one question, and only changed my mind once (soup, salad, corn, green beans, mashed potatoes. Pick one!? Are they crazy? What do I fucking DO?!)

I came to Memphis with a curiosity and a craving for an Elvis sandwich: peanut butter, banana and bacon pressed between two slices of buttered and gilled bread. Arcade Restaurant was rumored to be the only dealer in town, but it turns out the King's creation is baconless (the nerve) so why bother?

At the adorably vintage Arcade, $7 bucks will get you chicken with dumplings more like planks of fat, cushy noodles than airy blobs of dough. You will run your tongue over these gravy slicked dumplings and savor their smooth texture for as long as possible before chewing and swallowing. You know you're in the deep South when the menu asks you to pick two vegetable sides, and macaroni and cheese has made the list. The frills may be few, but the noodles are tender and the cheese melty and plentiful. I nibbled a few bites of corn bread muffin, dipped my fork into a tiny plop of spicy peach cobbler, slapped a $10 on the table and ran out the door mid-chew. 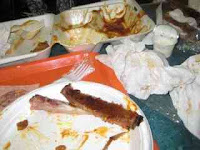 Needless to say, I left Memphis with a full belly and a major mega crush on Elvis Presley. I plan to hang his pompadoured poster above my bed, and passionately fan-faint every night while imagining that he's serenading me. I already bought one of those pork scented Plug-Ins, to really get into the Memphis mood.

"Hold me close, hold me tight 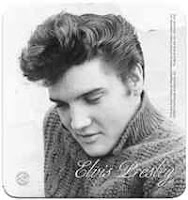 Make me thrill with delight
Let me know where I stand from the start.
I want you, I need you, I love you.
With all my heart"

Gettin' Fresh at the Farmer's Market 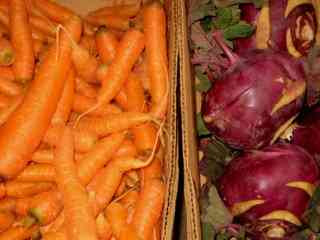 I am a produce pervert.

"Um, I just think your vegetables are really....pretty." Totally. Awkward.

This to the farmer with the constipated expression as I snap photos of his dirt flecked potatoes and adorably tiny Brussels sprouts. (Sidenote: did you all know it was Brussels sprouts, not brussel sprouts? I, for one, had no idea! Thanks spell check!)

Gosh darn it, I love the farmer's market. I mean, I really really love it. Like, I wanna marry it! Even if I don't buy a thing, I get actual tingles just admiring the chubby little misshaped carrots and careful stacks of vivid green leeks. 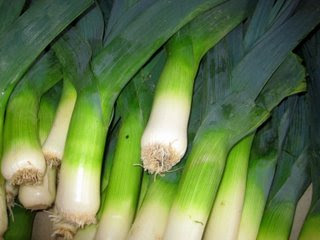 Even on a chilly winter's day (just like today!) the Ballard market is overflowing with local produce; the newborn root vegetables exposed to the Seattle sunlight for the very first time. There is amazing cheese (I'd caucus for Estrella Creamery and it's swoon-worthy, pungent, oozy, washed rind creations). There are local oysters and seed studded baguettes perfect for a sword fight or a hot butter bath. And the best way to warm up: cozy grilled-to-order quesadillas packed with fresh market vegetables and melty, white cheese. This rustic snack is like taking a big bite of the market itself. Wow. That might be the cheesiest line I've ever written. You see?? That's what the market does to me!

Feeling light, happy and inspired, I hightailed my bag of veg home to make a big pot of my newfound favorite soup: Chickpea and Leek. It's super (or should I say souper? Oh idiotic puns. Sigh.) simple, but remarkably tasty. Aka I can eat it for a few days without getting sick of it. It's a Jamie Oliver recipe, and satisfies both creamy and chunky soup cravings.

To Get the Job Done:

-12 oz can of chick peas (garbanzo beans)
-1 medium white/yellow potato (peeled and diced)
-5 medium leeks (sliced. discard tips)
-2 cloves chopped garlic
-3 cups chicken or veggie broth (I do half and half)
-a knob of butter (oh, those lispy British cooks and their whimsical kitchen slang)
-a tablespoon olive oil
-salt and pepper
-Parmesan cheese for garnish (Really intensifies the tasty factor. Get a fresh chunk for grating)

-Warm a soup pot, then add the butter and oil. Let it melt.

-Add leeks, garlic, and a few shakes of salt. Sweat gently. Not you, the food. (Read: This be the hee-larious instructions from my pal Carrie, who bequeathed me the recipe. I love the word bequeath. Just be careful not to stutter and morph the "th" into an "f." Happened to me once and...oh, Jesus. I completely digress)

-Add 2 cups of stock. Simmer for 15 minutes (I do lid-on to cook potatoes through)

-Now, bust out a blender or food processor or hand mixer. Ladle in some of the soup and blend. You can do as much or little as you like. I blend about half. This makes for a creamy consistency, but leaves lots of the chunks that make the soup so satisfying.

-Add the blended bit back to the pot and add remaining cup of broth. Let simmer for another 15 minutes uncovered (or longer -- it's an unfussy recipe), taste and season with salt and pepper - and serve! You will need to add salt.

I like to peel big curls of Parmesan off the hunk -- and sprinkle on top of each bowl of soup.
Posted by Eat. Eat. Eat. Enjoy! at 8:53 PM No comments: 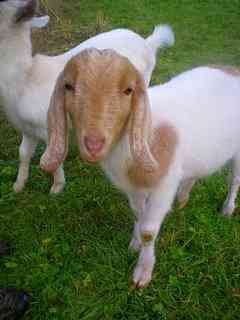 I've got a bad case of goat fever. And it's all Herby's fault. Yeah, that's right, the goat's name is Herby (I call him Herby Poo and Puffy McPufferHerb in my mind) and I have a major crush on him.

Herby belongs to my heart, but he lives with Ron & Michelle (we have an open relationship). Thankfully they hosted the last Dinner Club, so I had a chance to canoodle with the Herbster once again. 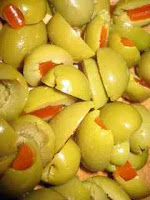 For this dinner we each picked a recipe from the Best of Gourmet 2000 cookbook. I made Moroccan Chicken with Preserved Meyer Lemons and Green Olives. Readers, preserved lemons don't grow on trees, so I had to get hella Amish and preserve those puppies myself. Good thing it was easy, but sounds totes hard so people are totes impressed. 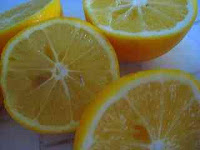 hose Meyer Lemons for five minutes, cut 'em into sections, roll them in lots of coarse salt, shove them in a (pickle) jar and drown them in lemon juice. Five days later: preserved! Now you can eat the peels; puckery, salty and soft.

As dull and drab as the dish may look, the salty lemon and pimento stuffed olives brighten up the turmeric stained chicken. Add some sauted mushrooms and onions, and you've got a comforting and super flavorful dish. Just don't overcook (oddly, just some of) the chicken (dammit!) or you'll be sorry. 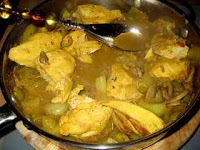 
Hey! Wanna know what my fellow Foodaholics cooked? No? You don't? You only care about what I make? Oh reader, that's sweet, but just so rude! Go on, take a looksie: 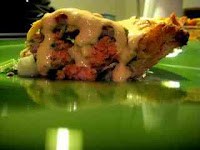 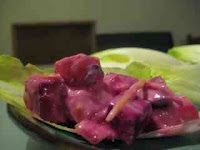 That there on the left is what we like to call a Salmon and Leek Pie. Mmmm....piiiiiie. It's topped with a sour cream chili sauce. Oh, and that down below? That's a little Beet, Jicama and Citrus Zest salad with garlic yogurt dressing...on endive. 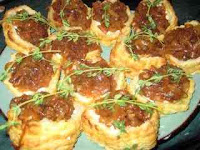 Coming up on your left, my favorite dish of the night: Puff pastry smeared with lotsa creamy goat cheese, topped with caramelized onions and sage. Mmm! Dan cooked the onions down with Sherry, and they took on a deep, intense, almost meaty, flavor. 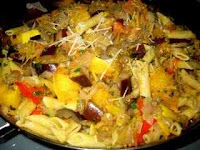 Coming up on your right, we've got your classic Ratatouille heaped atop a pile of pasta.

And for dessert, some Hot Banana Creme Brulee, freshly caramelized by way of blowtorch. 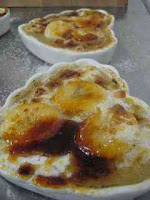 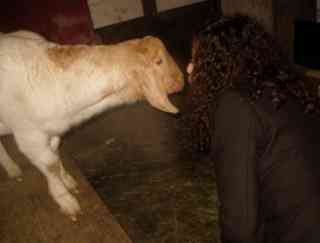 Not even a dinner this delicious could cure my goat fever. xo
Posted by Eat. Eat. Eat. Enjoy! at 11:45 PM No comments: