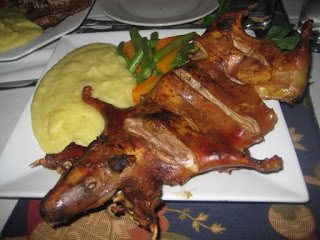 Americans aren't too hip on eating their pets. They cower at cat consumption and look down on dog dining. If it's fluffy, furry or fetches, chances are they aren't interested. In fact, they are downright appalled!

I say they because I have never included myself in this camp. Yes, I love cats to an embarrassingly mockable degree, but given the chance, I might take a taste of a Tabby. No offense to adorable animals everywhere, but when it comes to cuisine, I wanna try everything! Which is why I couldn't wait to eat in Peru. A country that makes no excuse for its love of the guinea gig. Guinea pig on a plate, that is.

Called cuy, the rascally rodent usually only shows up on more expensive restaurant menus, and is considered a sort of delicacy.

It was Day Two of our five week trek around 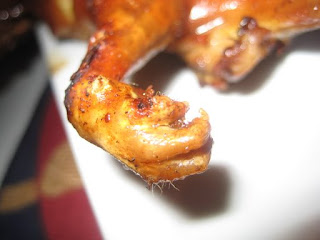 Peru, and we could wait no longer. Even my boyfriend, who as a child adored his guinea pig named Whinnie, was eager to try the pet on a plate. We grandly ordered up a cuy, along with an alpaca steak, in the charming city of Arequipa.

But even I was not prepared for the crisp, brown, tooth-to-tail animal set before me. He came with teeth, and claws, and hair!

He was also no picnic to eat. Fork and knife were abandoned for 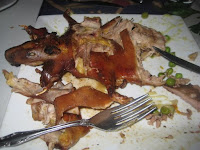 fingers, and once I managed to peel off his difficult layer of thick, rubbery skin, there was not much meat underneath. What meat there was tasted strong, gamy and...well, rodenty. Much more of a novelty than a delicacy, if you ask me.

A delicacy you can look in the eye, and even scratch behind the ears, if you stroll through some of Peru's amazing open air markets. At a street market in Calca, a quaint community in the Sacred 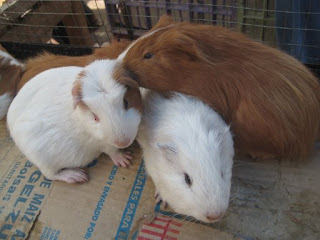 Valley, guinea pigs squeak their days away in cages, oblivious to their dinner plate fate.

And oblivious to the luxurious lives their guinea pig pals are living up north.

America! Where the pets are just for petting.
Posted by Eat. Eat. Eat. Enjoy! at 5:40 PM 2 comments: