For nearly a decade now, I have enjoyed a passionate love affair with a bright eyed man in an (alright-already-we-get-the-point) huge sombrero. Obviously I'm talking about the handsome devil on the bottle of Tapatio.

I was introduced to the "red crack" by a neighbor in college, who had me over for roasted poblano peppers stuffed with cotija cheese and drizzled with Tapatio. Since then my cupboard, my desk at work, and (for a while) my car's glove compartment has always been stocked with a nice, big bottle.

I have no doubt eaten quarts of Tapatio over the years. But the last time I roasted a Mexican pepper, I was still buying college ruled binder paper and doing keg stands.
So it seemed this year's Tres de Mayo party was the perfect opportunity to reunite with the poblano. I decided to one-up my former neighbor with something new and delicious: chile rellenos. 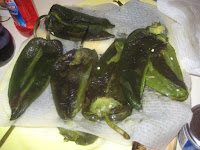 To Roast the Poblanos:

Lay them on a cookie sheet and throw them under the broiler. When they turn black and blistery, flip them over. The goal is to blister up as much of the pepper as you can.

Fling them into a paper bag to sweat for about 10-15 minutes (I imagine the peppers wear little baby sweat bands). This will make the skin peel off nice and easy. Which brings us to the next step: Peel the skin off. But leave the stems attached.

To Stuff The Poblanos:

Cut a slit around the pepper so you can remove the seeds. Be careful to keep the pepper in one piece. Then insert slices of pepperjack, Monterey jack, or cotija cheese. I love cotija, but the jacks melt super nice.

To Make the Dipping Batter: 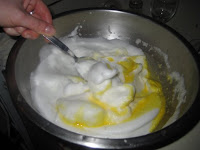 You'll need as many eggs as you have peppers. Separate the whites from the yolks, and save the yolks in a little bowl.

In a nice big bowl, beat the living tweedle out of the egg whites with an electric mixer until stiff peaks form. Beat the yolks with a tablespoon each of flour and salt. Combine the two! 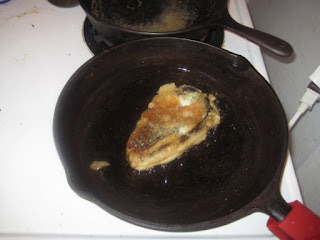 Fill a plate or pie pan with flour, and get yer little assembly line moving.

Dredge both sides of the pepper in flour, coat it in the egg mixture, then drop it into a smoking hot pan of oil. You'll want about a cup of oil.

Fry em up til golden brown and drain on paper towels. Sprinkle with salt and serve immediately with a nice, big bottle of Tapatio.

This aint no neat and tidy operation. You will most likely drip fluffy eggs all over the floor, onto your Tres de Mayo party dress, and into your hair. But you will be so proud of yourself when the task is complete! Chile rellenos are more than just a bitch to make; they're an all expense paid trip to Tasty Town. 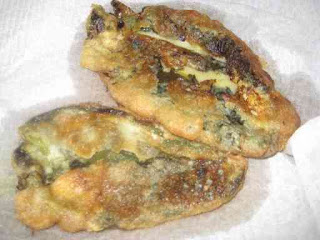 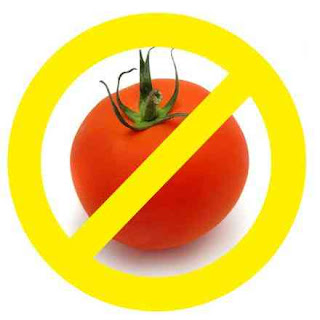 I definitely hate to admit it. I always wanna lie about it. And when people do find out, it's completely humiliating.

I know! I know! I already know you love to bite into them like apples, garnished with only a sprinkle of salt. I know you love them fresh from the garden, still warm from the sun. And I know you think you can change my palate's mind with your special (allegedly) magically delicious tomatoes. I've heard it all before! But I just.don't.like.them.

As a "regular person" I've endured a lifetime of torment for my tomato trepidation. But as a restaurant critic - it seems I am legally bound to enjoy all foods - especially something as basic as the raw tomato. I have even received a piece of hate mail on this very subject:

I enjoy your food reviews. unfortunately i do not think that you have the ability to critique restaurants as it seems that you are an awfully picky eater (i.e do not like tomatoes).

Give me a frikkin' break: it's the only thing I truly don't like!

On Sunday night, the monthly Seattle Food Bloggers dinner was held at The Capitol Grille. Not being a dapper grandpa who smokes a pipe, has a groomed mustache and enjoys counting money, I would never have dined there on my own.

We were treated to a complimentary zillion course dinner that included local wines, filet mignon, and lobster macaroni and cheese. But the most important course of the night turned out be the salad.

I chose the Caprese. I figured donating my tomatoes to the table would be like dropping off a bag of Versace at t 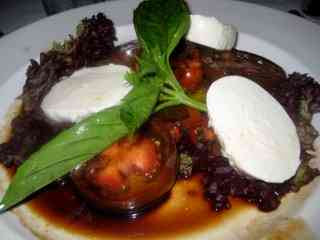 he Goodwill. So I pawned off most of the big chunks, but was oddly protective of the little yellow and red grape tomatoes coated in 12 year old balsamic. I gave one a try. Hmm. Not bad. I tried another. And another. They were so sweet! And perfectly ripe! And not gushing with slimy seeds! And probably completely masked by that delicious aged balsamic. A perfect fork full of fresh mozzarella, pungent basil and tomato. I am totally getting this Caprese salad concept.

Hallelujah! I no longer have to live in shame! I think my tomato shunning days are over!

As long as there's a bottle of 12 year old balsamic handy. Or at least a dapper, mustachioed grandpa with some extra money that needs counting.
Posted by Eat. Eat. Eat. Enjoy! at 8:31 PM 2 comments: